Well, April 2020 was one for the books. Actually, it felt more like a Hollywood movie script, didn't it? Seeing the whole world shut down in a matter of weeks was eerie and bizarre...like is this real life?!? I'm a stay at home with kids that aren't in school yet, so quarantine isn't that different from my regular routine...and still, it was such a strange month. Fortunately/unfortunately, Ben's company is essential so he still went to work, same as usual, and it was just me and the kids at home. There were times when it felt totally normal. But other times, it would hit me and feel like anything but normal. 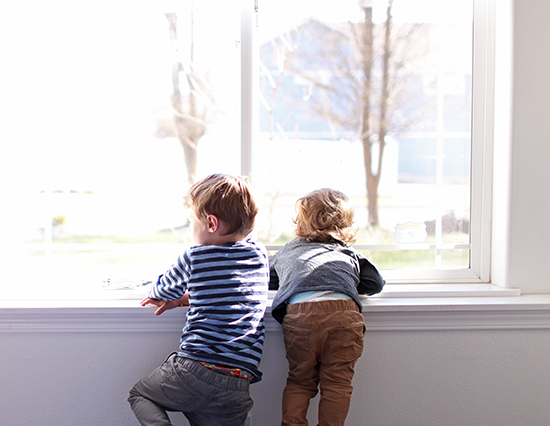 We have a calendar in the breakfast nook with photos from every month last year, and the kids kept asking if we could do things that we did in April 2019. The gondola? The carousel? The park? It was sad to keep telling them no, that's still closed. And of course the hardest part was when they asked to see people. I hate saying no to that. We've missed seeing our friends and extended family (as I'm sure you have too). On the positive side, I feel like my kids have grown even closer. They've played really well together during this time. Sometimes their age gap is exhausting, but during this quarantine I have been super thankful for how close they are. I mean, don't get me wrong, Ian and Emmett have fights every day, but they also have blissfully long stretches where they entertain each other and have the best time. I know either of them would have been way more bored/whiny/needy without the other. Best friends!! 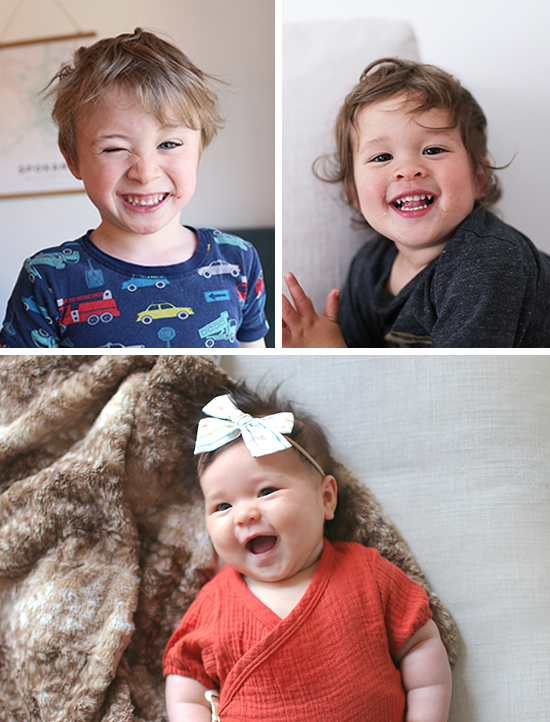 Ian is almost four; he's my big helper and always wants to do things himself (crack an egg, take out the garbage, pour his own milk, pick his own clothes). I'm trying to encourage it even though it often takes longer and creates more mess. I love seeing his pride and sense of accomplishment when he does something new. Another thing I love seeing? How gentle and sweet he is with Audrey. He asks to hold her all the time and I often find him laying down next to her and telling her "I love you baby Audrey!" Whenever she cries, he is quick to get my attention and demand, "Feed her!!! Feed my baby!" And he's in a stage where I get that hilarious one-eye-closed, nose crinkled face whenever I ask him to smile.

Emmett turned two during this quarantine (I shared some pics from his birthday here). He is growing and developing so fast! He has many, many songs memorized and I LOVE when I overhear him singing so sweetly to himself. He can count to thirteen, knows all his colors, and is speaking in full sentences with an impressive vocabulary (it's so cute to hear him saying big words in his adorable two year old voice). One of my favorite things he's been doing lately is speaking words of encouragement and praise for the most random things! Like watching the garbage truck pick up garbage and saying "Good job garbage man! You did it garbage man!!" It cracks me up, and makes me want to give him a big hug. He is such a sweetie.

Audrey is four months old today, and such a joy!! I got really lucky, she is an EASY baby. She's either sleeping or contentedly kicking around on the floor 90% of the time. She loves to watch her brothers and wants to feel like she's part of the action. Her giggle is the sweetest sound. This month she started rolling (both ways!) and is doing it pretty consistently now. Still not sleeping through the night, but she usually only wakes one time so I can't complain. She has grown so much during quarantine, I feel kind of sad that our family has missed out on all the changes! 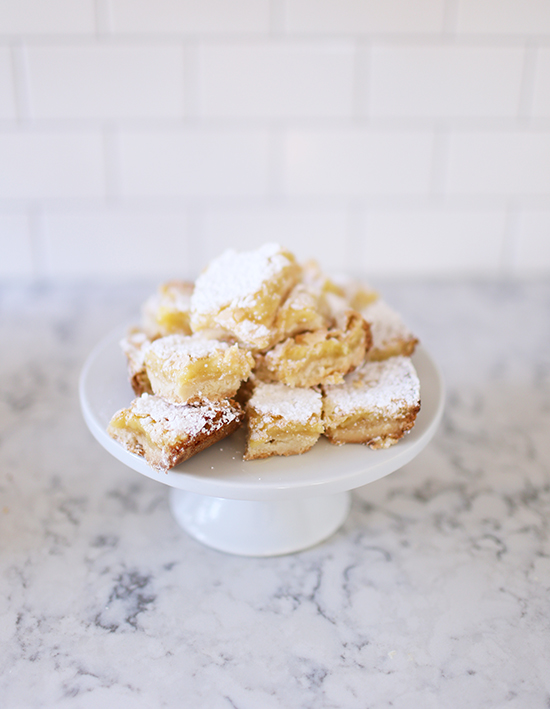 One of the best things about this quarantine is that, without any outside plans, I have been forced to really focus on my kids and plan my own activities for them. I realized that normally, I would let playdates with friends or going to Costco or having my mom come over be the activity for the day. With a slower (nonexistent) schedule and no one else to rely on, I have had to figure out ways to entertain the kids myself. And it's been fun! I mean, I definitely miss getting together with my friends, and I miss my mom coming over to play with the kids and give me a break...but I have also enjoyed doing things with the kids that I probably wouldn't have done if we had other activities filling up our time. Lots of of baking, sidewalk chalk, riding bikes, and walking/driving to various construction sites so the kids can watch construction trucks (their current obsession). 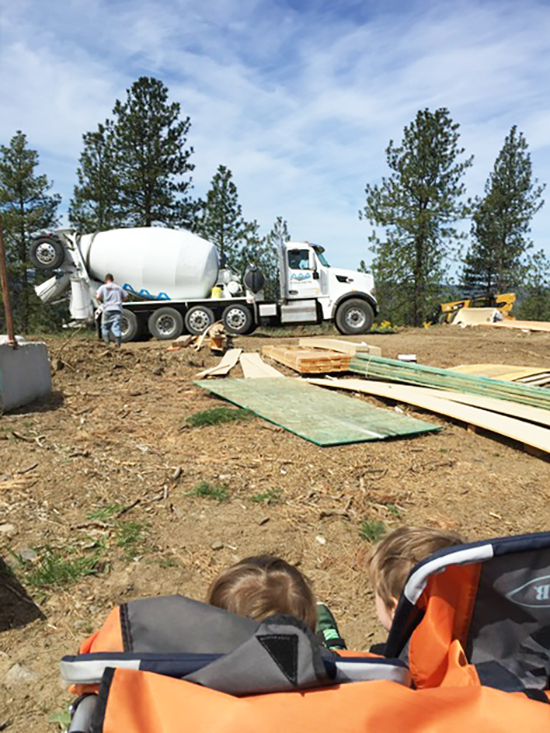 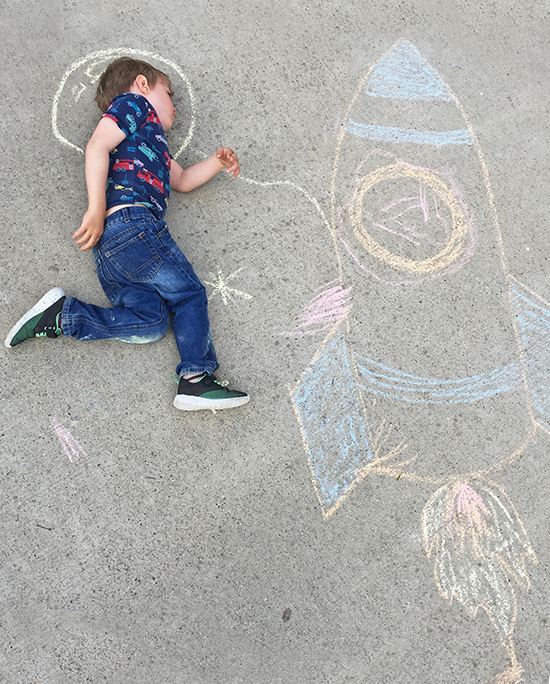 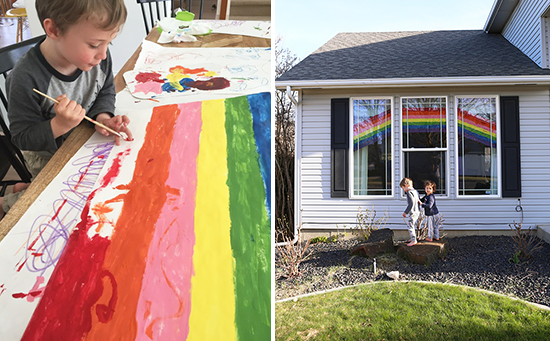 We've also done a lot of drawing and little craft projects with supplies we already had around the house. We painted that rainbow for our window, made cat masks, cut out a bunch of trucks from paper (the boy version of paper dolls) and we painted rocks (inspired by a walk we went on, where other kids had lined the trail with colorful rocks). 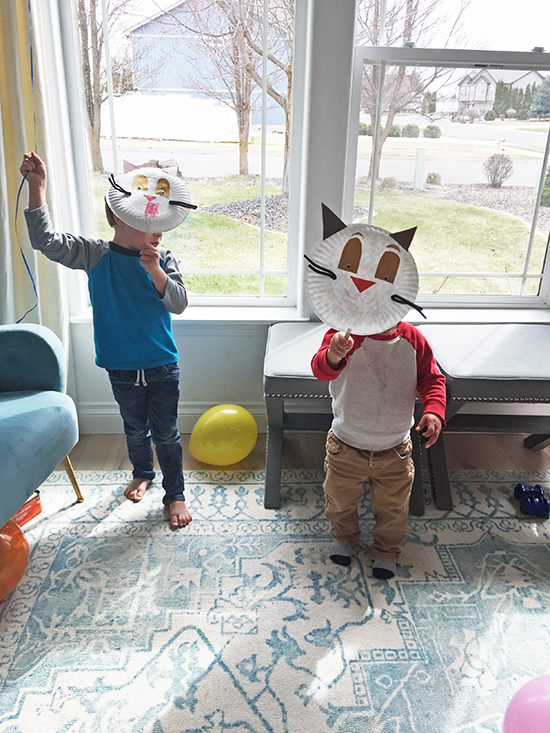 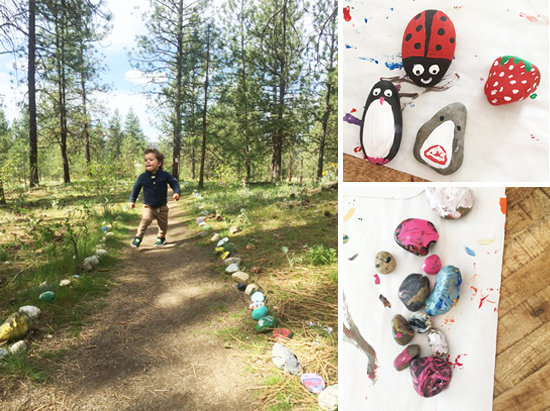 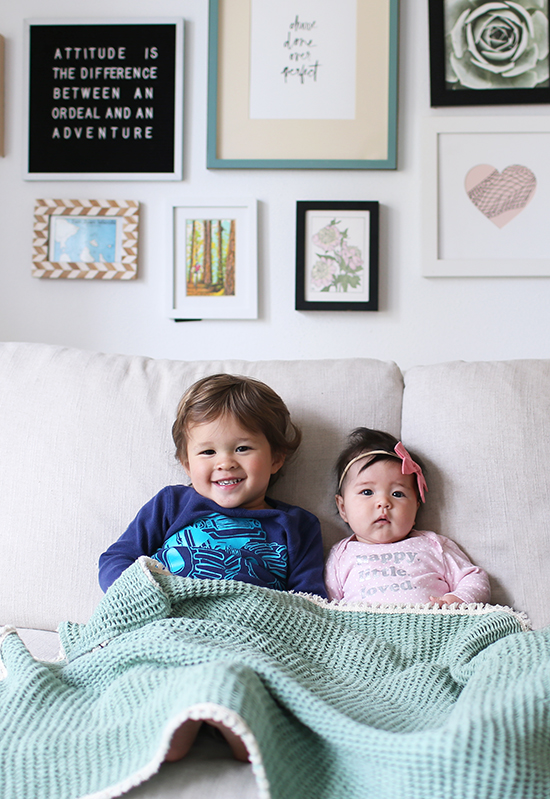 It's like the saying on that letterboard behind Emmett..attitude is the difference between an ordeal and an adventure. I have really tried to make this an adventure for the sake of our kids. I actually feel pretty thankful for that because, without the kids, I probably would have let my mind spiral trying to predict the future, reading way too many news articles, and binge-watching too many shows (although I admit I have done some of that still...anyone else watching Zoey's Extraordinary Playlist? It's cute and light-hearted). 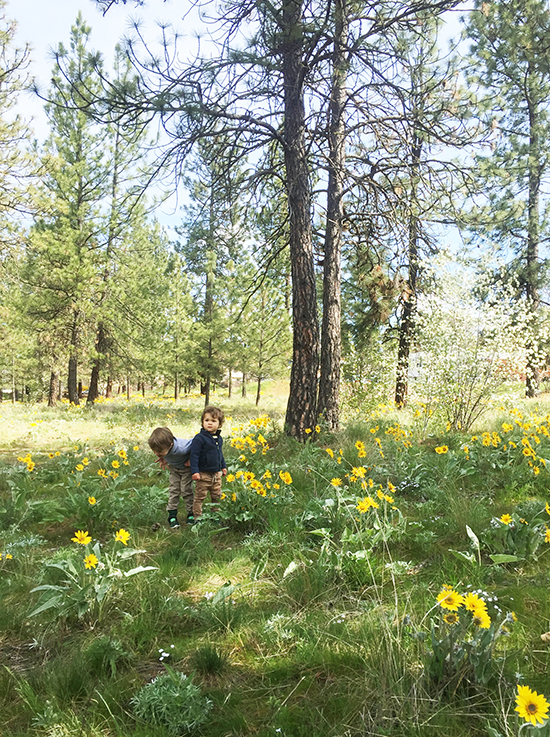 As the weather has gotten warmer, we've also done a few hikes and small nature walks to see the wildflowers and blooming trees (such mood lifters). Driving has also been my way to get out of the house and enjoy some different scenery in a "socially distanced" way. Nap drives are the only way I can get all three kids to sleep at the same time, so they have been my go-to this month (with drive thru coffee for the win)! 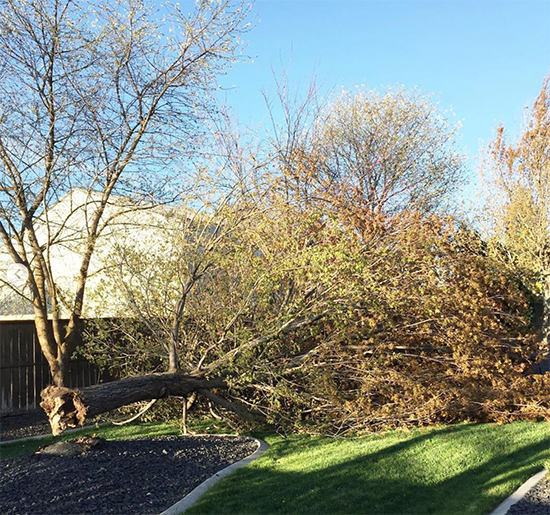 If you follow me on Instagram, you might have seen that one of the most "exciting" things to happen this month was when a big tree fell over in our backyard. It was really windy, we heard a crack, and we looked outside to see the tree topple over...right where the kids had been playing just minutes before. Very, very scary and freaky. Thankfully the kids had just come back inside so no one was hurt, and nothing was damaged, but it could've been soo much worse. Thank you, Lord!!!!

Here are a few more photos from our April in quarantine.

How are you all?? Let's hope these April showers bring some May flowers!!! I think we could all use a big metaphorical bouquet (I'll take a real bouquet too).