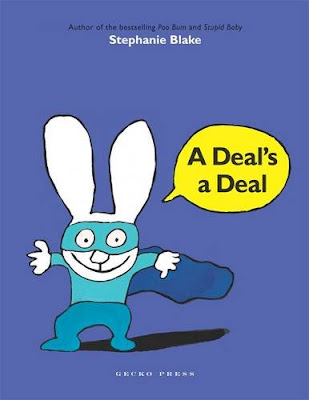 Certain books in our #Booky100Keepers list have entered our collective family vocabulary, containing words or phrases that have wormed their way into our everyday lives.

Stephanie Blake's brilliant "A Deal's a Deal" is one such book, and arrived just at the right time - as C and her schoolmates began the ritual of swapping - usually with C coming off worse in any playground swapping deal, much to our annoyance (we eventually had to ban her from taking stuff into school as she came back with utter junk which she'd swapped for the expensive Tinc stuff we'd bought her).

In the story Simon the Rabbit rather fancies his best friend Ferdinand's toy car and agrees to a swap, only to realise that the car he's ended up with is plastic, is broken and is utterly worthless.

Simon hatches a plan of dire revenge, claiming that his friend left something inside the car he'd obviously forgotten about, but a deal's a deal, to take back is to steal - so the only way Ferdinand is getting his prized possession back is to swap things back.

We soon find out what the 'hidden thing' inside the car was, once again Stephanie dipping into the grosser side of representing what kids are actually like in real life (we won't keep you in suspense, the 'valuable object' is actually a bogey!)

Stephanie's books are always funny, anarchic, and of course achieve that magical balance of allowing kids to vicariously live through the somewhat unsavoury behaviour of the book's characters, hopefully learning from the moral that each story gently weaves in.

Check out our review links of this and Stephanie's other books:

A Deal's a Deal by Stephanie Blake (Gecko Press)

"Nits!" by Stephanie Blake, translated by Linda Burgess (Gecko Press)
Back to Feed
Use left/right arrows to navigate the slideshow or swipe left/right if using a mobile device