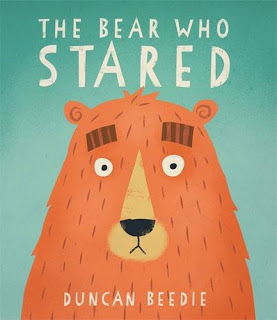 This is another #Booky100Keeper that has become a colossal part of the family's vocabulary.

From an early age, C has really hated being stared at by other kids, particularly when she's eating. So when we first read "The Bear Who Stared" by Duncan Beedie, the book could have been tailor-made for her.

It's the story of a bear who really doesn't mean any harm, but rather rudely, can't help but stare. He stares at strangers, he stares at friends, he even puts people off their lovely picnic lunch by staring.

He just can't help himself!

Soon though the bear realises that his natural curiosity is unwelcome, and after much soul-searching, realises there are better ways to make friends than goggling at 'em!

The reason this book has been a keeper, and the reason it's so well loved is because it's now C's weapon against kids who stare. Every time it happens, in a loud voice she'll turn to us and say "Hey Daddy / Mummy. Do you remember that book, oh what was it called now. You know, the one about the bear. The bear who couldn't stop staring. Oh what was the name of it?" - to much amusement on our part, and complete ignorance on the part of the starer (probably, unless they have excellent taste and have picked up Duncan's book but learned absolutely nothing from it).

We feel it's also worth mentioning another keeper, purely because this one will get you RIGHT IN THE HEART EVERY TIME... 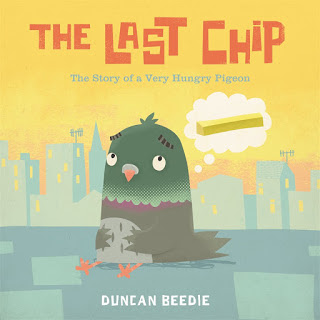 "The Last Chip" is the story of a pigeon. Now, normally I despise and loathe pigeons with an intense burning hatred (we are plagued with them where we live, waking us up every morning at 4 AM making that ridiculous noise they make when they're feeling a bit fruity) but the pigeon in this book plucks at our heart strings something rotten (thanks largely to Duncan's gift of creating the most brilliant characterful illustrations in his books).

Percy is small, and finds it difficult to find food amongst the sprawling city buildings where he makes his home. Other pigeons are big bullies and force Percy to scratch for the merest scraps. As he gets hungrier and hungrier, Percy decides to make one last effort to find a place to live where he will find lots to eat.

He almost uses his last ounce of strength doing so, but on arrival at the seaside Percy finds life is even tougher - thanks to nasty seagulls who have staked out their territory and don't want a scruffy little pigeon muscling in on their patch.

Thankfully at the last moment Percy finds a friend, a man in a similar circumstance - with not much to his name, but perhaps a last chip to let Percy finally have a feast and get some of his strength back. By this time in the book we're utter wrecks - and I'm sure that any author / illustrator, on hearing that their work has such a huge emotional effect on their readers, is secretly quite chuffed. So they should be!

The Bear who Stared by Duncan Beedie (Templar Publishing)