by admin April 23, 2020
This is Everyday Grammar. And today, I’ll start the program with a question: If I told you to touch your toes, would you know where to find these body parts? A toe is one of the five separate parts at the end of each foot. If you did not know that, you are not alone. Many English learners need practice at learning the names of parts of the body. On recent programs, I talked about grammar games that you can play at home, like Jeopardy and Questions and Answers.  Today’s game is one that will help you remember anatomy words as you also practice using the imperative – the grammatical form used in commands. The game is called Simon Says and you can play it with people at home and on video calls.  Many Americans played Simon Says as children -- but of course we were using our native language. Playing the game in a foreign language is a totally different experience. It makes the game more challenging and turns it into a learning tool. But it is also fun! Simon Says is a physical game and you can play it inside your home or outside in the yard.    In addition to using the imperative and building your vocabulary, Simon Says also helps you practice saying and hearing new words in English. You will even get a little physical exercise – and, hopefully, a few laughs. Playing the game To start the game, you will need three or more players but no more than eight. This way everyone can see the movements of the other players. One player at a time leads the game. The leader calls out commands to the group. If the leader says “Simon says” in ordering the command, the other players must carry out that command. But if the words “Simon says” are not included in the command, the players must remain still. Listen to this example and you’ll hear what I mean: Simon says jump on one foot. Simon says look up. Simon says touch your ears. Simon says run in place. Turn around. If any players turn around on the last command, they lose and leave the game. The last player remaining in the game wins! Then, the winning player can become the leader and everyone plays again. Or if no one wins, the group can choose a new leader. Using the imperative Now that you know how the game works, we can talk a little bit more about the imperative. Did you notice that I used only the imperative form in the commands? I said, for example, “Simon says touch your ears.” The command there is “touch your ears” and the verb is “touch.” English commands begin with a verb and use the shortest verb form with no s- ending. Players giving commands cannot use questions such as “Simon says, can you turn around?” or modal verbs, as in “Simon says you must turn around.” Neither of these are examples of the imperative form. One small piece of advice: Before starting the game, choose a level of difficulty based on the English skills of the players. You can make the game easier or harder by giving commands more quickly or slowly and by choosing vocabulary that is easy or hard. Well, that’s all for today’s program. Simon says try playing the game and let us know how it goes! I’m Alice Bryant.   Alice Bryant wrote this story for VOA Learning English. Caty Weaver was the editor. ___________________________________________________________________   Words in This Story   anatomy - n. the parts that form a living thing, such as an animal or plant challenging - adj. difficult in a way that is usually interesting or enjoyable yard - n. an outdoor area that is next to a house and is usually covered by grass vocabulary -  n. the words that make up a language practice - v. to do something again and again in order to get better at it modal verb - n. a verb (such as can, must or should) that is usually used with another verb to express ideas such as possibility, necessity, and permission ___________________________________________________________________   Choosing Vocabulary   Before you play, choose the level of difficulty for the game. You can make the game faster and pick harder words for more fluent speakers. Examples of more commonly known words for body parts include eyes, ears, nose, mouth, face, hands and feet. Less known are words including knees, shoulders, elbows, stomach and forehead.   Verbs more widely understood include touch, stand, sit, jump, run, turn, close and move. Less commonly known verbs include wiggle, hop, jog, shake, kick, cross and bend. If you choose harder words, it is a good idea to discuss them with the players before starting the game. You can practice before you play. For help saying new words, visit a website that lets you hear the words as they are spoken, such as Merriam Webster’s Learners Dictionary. 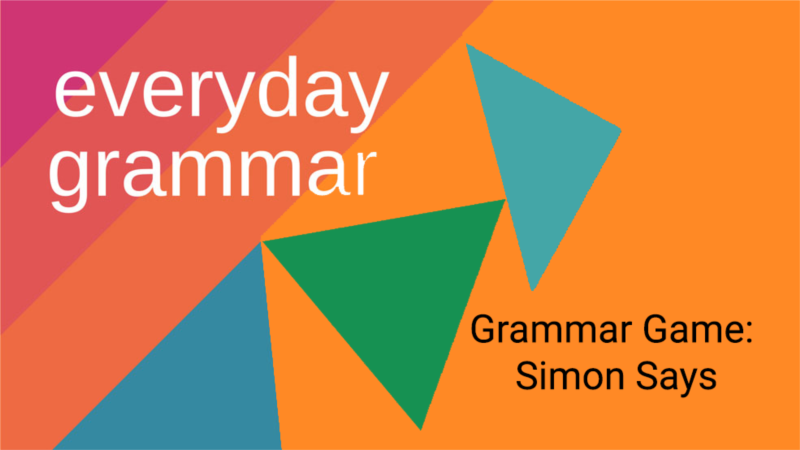