People sometimes say “when you have a hammer, everything looks like a nail” as if that were a bad thing. Hitting up Wikipedia, they’re calling it the Law of the Instrument or Maslow’s Hammer and calling it a cognitive bias. But I like hammers…

I’m working on a new tool, a four-axis hot-wire foam cutter based roughly on this design, but built out of stuff in my basement so far. I want it primarily to turn out wings for RC airplanes so that I can play around with airfoils and construction methods and so on. But halfway through building this new “hammer”, I’m already getting funny ideas of other projects that could be built with it. Classic nail-seeking behavior. 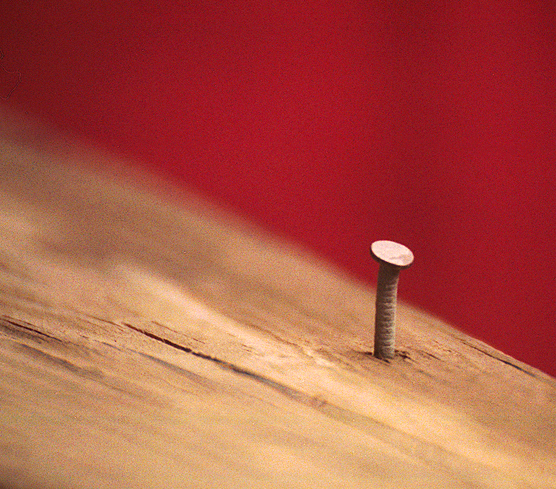 And some of these thoughts are making me reconsider the design of my hammer. I originally wanted to build it low, because it’s not likely that I’ll ever want to cut wing sections taller than 50 mm or so. But as soon as cutting out giant letters to decorate my son’s room, or maybe parts for a boat hull enter my mind, that means a significantly taller cutter, with ensuing complications.

So here I am suffering simultaneously from Maslow’s Hammer and scope creep, but I’m not sad about either of these “ills”. Playing with a couple manual prototypes for the CNC hot-wire cutter has expanded my design vocabulary; I’ve thought of a couple cool projects that I simply wouldn’t have had the mental map for before. Having tools expands the possible ways you can build, cognitive bias or not.

One person’s scope creep is another’s “fully realizing the potential of a project”. I’m pretty sure that I’ll build a version two of this machine anyway, so maybe it’s not a big deal if the first draft were height-limited, but the process of thinking through the height problem has actually lead me to a better design even for the short cutter. (Tension provided by an external bow instead of born by the vertical CNC towers. I’ll write the project up when I’m done. But that’s not the point.)

Maybe instead of lamenting Maslow’s cognitive bias, we should be celebrating the other side of the same coin: that nails are tremendously useful, and that the simple fact of having a hammer can lead you to fully appreciate them, and in turn expand what you’re capable of. As for scope creep? As long as I get the project done over my vacation next week, all’s well, right?

This article is part of the Hackaday.com newsletter, delivered every seven days for each of the last 200+ weeks. It also includes our favorite articles from the last seven days that you can see on the web version of the newsletter. Want this type of article to hit your inbox every Friday morning? You should sign up!
Back to Feed
Use left/right arrows to navigate the slideshow or swipe left/right if using a mobile device