I Pretended to Be Asexual When I Was a Teen 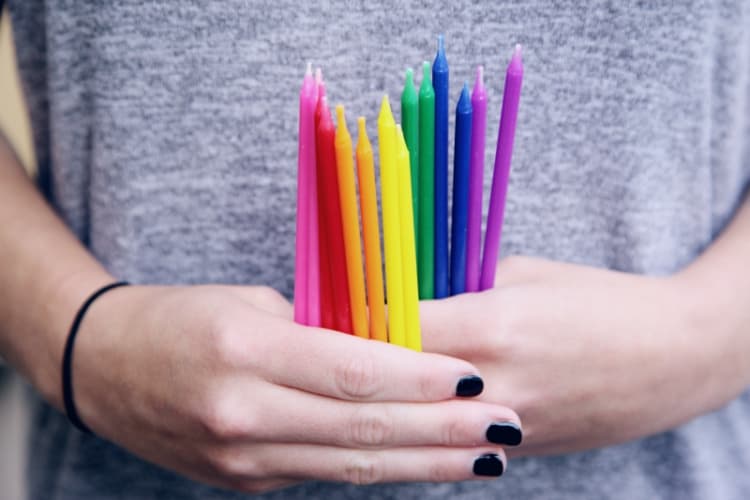 “Sex? What’s that?” I said naively, shoving a PB&J sandwich into my mouth.

I really was ignorant about sex, but deep down, I could gather some idea.

“Jeez, you really are sheltered. And you’re absolutely sure you’ve never had a crush on anyone?” Dale pestered.

“No, I said. I guess I just like people as friends.”

“Well, then you’re asexual!” he proclaimed.

Let me start by saying: There are real asexuals.

Some people are aroused around the clock. Others experience little to no sexual interest.

Like the majority, I’m in between. I definitely was never asexual. But I said that I was throughout high school. Here are 8 things that I learned from the experience.

Wherever you are in your sexual (or asexual) liberation, I hope this story helps you embrace who you are even more today than you did yesterday.

1. Sexual shame can begin early on.

I grew up feeling ashamed. I’ll never understand why. I think maybe I touched myself when I was 3 and was told not to. I just remember doing it alone in my bed at night.

Not fathoming the nature of this strange sensation, I only know that what I was doing was a shameful, terrible, unspeakable secret.

Much of what I gleaned from fifth-grade sex ed, and from glancing what the adults were watching on tv, looked bleak. STDs, affairs, divorce, Law & Order pedophiles, teen pregnancy scares…

There must have been plenty of positives, and my family was pro-gay, yet my mind fixated on the negative.

Before I even understood what it was, I had already decided that sex was bad news. Luckily, we can always learn sex-positivity later on.

In middle school, I was teased for being “so gay” and “trisexual” (transsexual, they must have meant). It was a smaller, conservative city. I was shy and sensitive to what everyone thought.

I liked boys. But my sexual side was not allowed here. Every week of school it seemed, I received a new joke, remark, or question about my sexuality that left me feeling embarrassed.

This passage from The Book of Life sums it up:

Sexual desire is one of the most personal and vulnerable things that we are ever called upon to express — and it exposes one to potentially momentous degrees of ridicule. As bullies of all kinds have always known, if you want to destroy someone fast, shame them about their sexuality; they’ll never have the self-confidence to challenge you again.

They said I was gay because of how I looked and sounded. They made it sound like a disgusting thing to be. If I were openly attracted to boys, it felt like I would be letting them win.

Instead, I wanted to prove them wrong. I wasn’t a pervert. I wasn’t a sinner. In fact, I wasn’t sexual at all.

If I had had a third eye for my classmates’ lives, I would have grasped just how many experienced non-straight attraction too. Or struggled from some other sexual stigma.

To use a messy eater’s analogy, I wasn’t the only one walking around with spaghetti sauce on my face. But I was too self-conscious to notice other people’s red stains.

Now I know. That’s why sex-negativity does not have the same power over me anymore.

But as a freshman in high school, I may have sexually shamed two of my classmates. Just like the kids who taunted me, I had no idea.

Call her Annabelle. Annabelle and I got along well. She was very nice.

In the corner with us in math class also sat Damian. I didn’t like Damian only because he didn’t seem to like me.

When the two talked, enjoying themselves, I felt jealous or envious. I probably thought, why is Annabelle talking to him?

“Stop flirting,” I said one day with annoyance.

I wish I hadn’t. It broke up their lively conversation.

“I’m never talking to you again,” she told me, turning away to hide her face.

4. There are real asexuals.

As much as many of us struggle sexually, others have their own advantages and disadvantages in being asexual.

In light of Dale’s earlier proclamation that I was asexual, I read the website of AVEN, which stands for Asexual Visibility and Education Network. I saw some YouTube videos by asexual people.

Asexual people don’t experience sexual attraction. However, they may be attracted to other people sensually, aesthetically, or romantically, such as wanting a hug, liking another’s looks, or desiring a relationship. They may have a libido, but it doesn’t inspire them to share that arousal with others.

Asexuality may describe about 1% of the population, but it’s hard to say. Sexual attraction’s intensity exists on a spectrum. People who experience it only minorly/rarely or after bonding with someone a lot may use terms like “graysexual” and “demisexual.”

Due to my shame and “grass is always greener” mentality, I idolized asexuals. Maybe I could convince myself that I really was one of them…

5. It’s okay to change your mind or your story about your sexuality.

Just as I felt pressured into keeping my sexuality secret, an asexual person might feel pressured to please someone else through sex. They might try to fit in with their friends’ interests, or simply lack the vocabulary to describe their difference.

A boy I had seen on YouTube said, “I’m bi” as a stepping stone to later coming out as gay. At the same time, actual bisexual people can feel pressured to fit in with the gay or straight crowd.

Ultimately I realized… I didn’t need to feel ashamed of being closeted, on top of the sexual shame that I already felt.

It should be expected that we change our stories sometimes. It’s common and completely understandable. We are always rediscovering who we are.

I was never truly asexual, but identifying as such became a learning period that I value to this day.

6. Come out gracefully, if you can.

My coming-out was not graceful. It didn’t even feel like coming out, it was so… bizarre.

By then a college freshman, I was uber obsessed with the show Pretty Little Liars. I wrote a joke Facebook post for April Fools’ Day, where the anonymous stalker “A” was supposedly airing all of my deep dark secrets in a blog post.

I couldn’t bring myself to press the submit button. So I scheduled the post to appear overnight.

The next morning, my friend Lima barged into my dorm room. Her alarmed voice woke me up.

She was such a loyal person, and she thought that an actual stalker was after me! She had already alerted the school officials. Fortunately, they would have figured out it was a prank.

I. Felt. HORRIBLE. Not only would I be mortified by my over-the-top post and take it down months later, but I had made a friend fear for my safety.

I understand why I did it. I desperately desired to shed every secret from my life. Plus, who doesn’t wish life could be as deliciously melodramatic as tv?

Next time I come out (about anything), I’ll likely do so in a gentler way that creates happy, proud, non-cringey memories.

If I could’ve been open about my sexuality as a teenager, I might have been open in other areas.

My femininity was the magnet for all those teasing remarks about being gay. Thus, I wanted to not only deny my sexuality but deny my gender. Being trans was an even bigger taboo.

To escape my worrisome life, I got addicted to online games. I hid how much time I spent gaming, and even started cheating at one of the games.

After the coming-out blog, it took me several years to realize I was not content being gender-neutral. I wanted to be understood as a transgender woman.

Authenticity in our sexual journeys opens up so much else. When I come clean in one way, additional truths get easier.

8. Even though I’m sexual, imagining being asexual helps me find balance.

By pretending, praying, and practicing to be asexual as a teen, I built a template for temperance that would serve me later.

My life changed after I came out as trans. My hopes went up from the sudden increase in male attention. I got addicted to validation. I started thinking that a relationship was what I most wanted.

Now during coronavirus quarantine, it helps to remember the wisdom from my asexual identity days:

I can experience each person’s unique beauty. I can be open to pure human connection. I can still embrace my carnal instincts, while letting more conscious ways of loving others take the lead.

That’s everything I learned from pretending to be asexual as a teenager.

I hoped that reflecting on the memories could make a small contribution to LGBTQIA pride.

Have you ever pretended your sexuality? If so, what did you learn?

This post was previously published on Equality Includes You and is republished here with permission from the author.
—

The post I Pretended to Be Asexual When I Was a Teen appeared first on The Good Men Project.