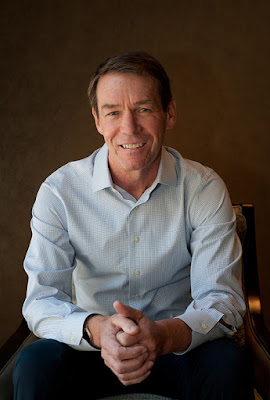 
Len Joy is an award-winning author of the novels, American Past Time (2014), Better Days (2018) and Everyone Dies Famous (August 2020). He is a nationally ranked triathlete and competes internationally representing the United States as part of TEAM USA. 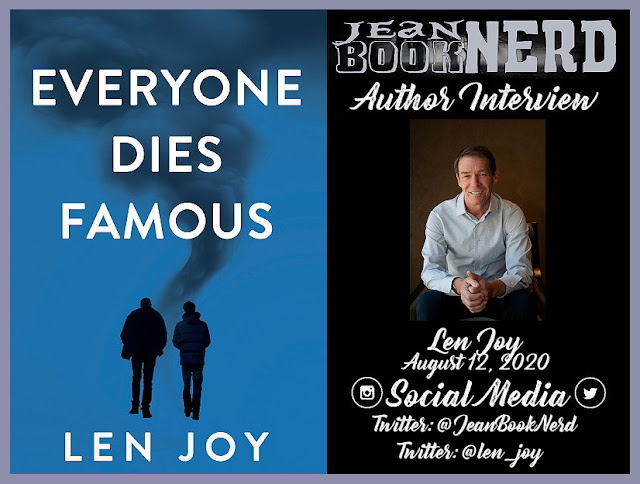 I grew up in Canandaigua, a small town in western New York. A town is a great stage for storytelling. You have a compact universe with all of the issues of race, class, and age available to write about. My hometown is not much like Maple Springs, but it was the inspiration for the small-town setting.

The core of the story is a road trip with an older man who has been a hero and a bum in his hometown and a young soldier who is trying to find himself. Woven throughout this daylong adventure are several subplots that are, because of the small-town setting, interconnected.

I listen to a lot of music, especially when I work out, and I like songs that tell stories. There were a few songs in particular that provided an emotional vibe for me while I was building the story. Martina McBride’s “Independence Day”, JT Hodges “Sleepy Little Town,” and of course, Miranda Lambert’s “Everybody Dies Famous in a Small Town.” These songs capture a lot of small-town elements: fun, parades, secrets that everyone knows, and heartbreak.

Who or what has influenced your writing, and in what way?
I started taking writing classes at the University of Chicago’s Graham School back in 2003. I supplemented their night school classes with summer workshops at the Iowa Writer’s Festival. I wanted to be a writer, not necessarily a novelist. I was fortunate that I had very good instructors at Graham School (Barbara Croft, Gary Wilson, Eileen Favorite, and Patrick Somerville) and at the Iowa Festival workshops.

At Iowa, Sands Hall and Sandra Scofield were especially helpful. In Sands’ workshop we would have a daily writing assignment, usually 300 words or less. Learning how to cut out all the unnecessary words was a valuable skill to master. Sandra Scofield, who wrote the popular craft book, “The Scene Book” taught me how to write vivid scenes and to understand that the scene was the fundamental building block for any story.

My writing style is very much a product of those influences. My prose is stripped down and my stories tend to be cinematic – very scene-oriented.

Tell us your most rewarding experience since being published.
I’ve had the opportunity to be a guest at several book clubs where one of my books was discussed. To hear people arguing passionately about characters and stories that I’ve created was most rewarding. And a lot of fun.

Can you tell the BookNerd community a little about Everyone Dies Famous?
It is a story from the heartland about the uncommon lives of everyday people. The choices they make, how they live their lives and how they die.

As a tornado threatens their town, a stubborn old man who has lost his son teams up with a troubled young soldier to deliver a jukebox to the wealthy developer who is having an affair with the soldier’s wife. It’s July 2003 and the small town of Maple Springs, Missouri is suffering through a month-long drought. Dancer Stonemason, a long-forgotten hometown hero still grieving over the death of his oldest son, is moving into town to live with his more dependable younger son. He hires Wayne Mesirow, an Iraq war veteran, to help him liquidate his son’s business. The heat wave breaks and the skies darken. Dancer tries to settle an old score while Wayne discovers the true cost of his wife’s indifference and his thoughts turn to revenge.

What part of Dancer did you enjoy writing the most?
I really enjoyed writing the scenes where Wayne and Dancer are together on the road. When the day begins, Dancer can barely tolerate Wayne. But as the trip continues and the two men share (in their masculine-non-sharing manner) their life stories, Dancer develops a father-like affection for Wayne. I liked writing the dialogue – the trash-talking and the sarcasm and the obvious generation-gap made for some fun conversations. At least for me.

If you could introduce one of your characters to any character from another book, who would it be and why?
It would be fun to write a scene where Dancer Stonemason meets Rabbit Angstrom (Rabbit, Run etc. by John Updike). They grew up in the same era and both men were high school sports stars who had their challenges after the cheering stopped. I don’t think Dancer would have liked Rabbit, but they could have had an interesting confrontation.

TEN QUOTES FROM EVERYONE DIES FAMOUS
What is something you think everyone should do at least once in their lives?
I have to confess that “should” is a word that I have tried to banish from my personal vocabulary. But I guess I can use this question to discuss an issue that is on my mind. I don’t think our country is as divided as you might think from listening to cable news or following social media posts. I think everyone should make an effort to listen to someone whose views are different from their own. Really listen to them. You might be surprised.

What event in your life would make a good movie?
Instead of a single event, I think my entire life would make a great epic film. But I want to wait until I win something exceptional like the Pulitzer, so I have a real socko final scene. The film could end with my heartfelt, passionate acceptance speech. I’m thinking something along the lines of Faulkner’s Nobel acceptance speech, “I believe man will not merely endure: he shall prevail.” It will probably be a few years, so I have time to work on it.

What was the best memory you ever had as a writer?
I worked on my first novel, American Past Time for over 8 years. I wrote and rewrote it a half dozen times. In August 2012, I posted on my blog that I had finally given up on the novel. I was putting it away and would try to write something else. Two weeks later, the editor of Hark! New Era Publishing emailed me and said they would be interested in publishing my book. It took another year of rewrites but in April 2014, American Past Time was published. 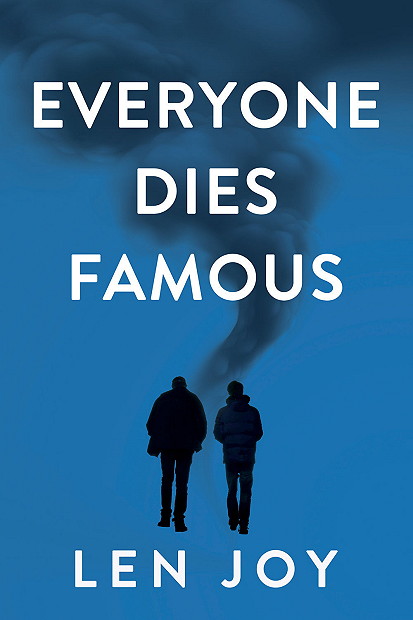 As a tornado threatens their town, a stubborn old man who has lost his son teams up with a troubled young soldier to deliver a jukebox to the wealthy developer having an affair with the soldier's wife.

It's July 2003 and the small town of Maple Springs, Missouri is suffering through a month-long drought. Dancer Stonemason, a long-forgotten hometown hero still grieving over the death of his oldest son, is moving into town to live with his more dependable younger son. He hires Wayne Mesirow, an Iraq war veteran, to help him liquidate his late son's business.

The heat wave breaks and the skies darken. Dancer tries to settle an old score while Wyne discovers the true cost of his wife's indifference and turns his thoughts to revenge. When the tornado hits Maple Springs, only one of the men will make it out alive.

"Everyone Dies Famous" is a story from the heartland about the uncommon lives of everyday people - the choices they make, how they live their lives, and how they die.

Praise for EVERYONE DIES FAMOUS

"The collateral damage from a freak tornado rips the heart out of Small-Town, America. Who is left and what they reveal has the potential to be even more devastating. Can anyone survive the aftermath? Recommended." —Chanticleer Reviews 5 Stars!

Len Joy's Everyone Dies Famous is a clear-eyed examination of how we live in an uncertain world. By creating imminently understandable characters and skillfully linking them to a specific landscape, one that is so evocatively described, he shows us all the ways in which we're connected, how fragile those threads are. In clear prose, Joy does real work here. I'm grateful for it. —Kevin Wilson, author of Nothing to See Here

"...a striking depiction of small-town America at the dawn of the 21st century."
- KIRKUS Reviews

In the realistic small-town novel Everyone Dies Famous, citizens struggle to cope with their pasts and adapt to the future... a focused novel about regret and redemption.  —FOREWORD REVIEWS

Mr. Joy sweeps us headlong into the swirling fury of lives buffeted not only by hail, rain, and wind, but even more so by disappointment, disillusion, and regret. He captures both physical and emotional dread with inexorable intensity. —Joe Kilgore, author of Farmhouse in the Rain

You can purchase Everyone Dies Famous at the following Retailers:

And now, The Giveaways.
Thank you LEN JOY for making this giveaway possible. 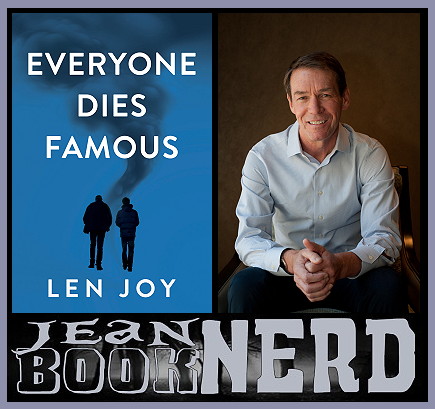 1 Winner will receive a Copy of Everyone Dies Famous by Len Joy.
*JBN is not responsible for Lost or Damaged Books in your Nerdy Mail Box*
a Rafflecopter giveaway
jbnlatestinterviews
Back to Feed
Use left/right arrows to navigate the slideshow or swipe left/right if using a mobile device