My Kids Are Learning a New Language While Social Distancing, and It’s Just What We Need 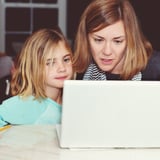 In the six-plus years that I've been a mom, I've wanted my kids to learn a second language. My husband is from Germany, and his whole family speaks German. Since my husband and I started dating, I've wanted to learn how to speak his native language, and in the 14 years we've been together, I've picked up just enough to understand what's going on in their conversations.

However, I've always wanted to be able to fully communicate whenever we visited his extended family in Germany. When we first got serious, I tried to have my husband teach me some vocabulary and basic conversational skills. But that proved to be a bad idea pretty quickly. My husband is many things, but he's not a teacher. He is the most patient man I've ever met, but when it came to this, it seemed like he just couldn't grasp my lack of pronunciation skills. He would say a word, I would repeat it (thinking it sounded just like what came out of his mouth), he would say no, then he would repeat the word slower. I'd say it back, he'd repeat, I'd say it again, and our frustration levels would rise. I would yell through a big grin, "That's exactly what I'm saying!," and he'd chuckle and say, "No, it's not," and that would be that. I promptly noted that I would need to look elsewhere if I wanted to learn this new language but never dedicated the time as life went on.

Related:
I Asked Friends to Film Themselves Reading, and Now Story Time Is a Bright Spot For My Son

But I knew once we had kids, I wanted them to speak German as a way to honor my husband's family (and also impress my father-in-law while we're at it, if I'm being honest). But of course, I've never known enough to teach my kids more than simple vocabulary. Meanwhile, my husband works a lot, so he doesn't have the time to dedicate to helping them learn. And when he is home, he wants to spend it actually communicating with them, not speaking another language only to have to translate what he just said.

So when I found myself spending all day, every day with both kids due to stay-at-home orders, I called up my sister-in-law (who's participating in social distancing a few states away) and asked how she would feel about virtual German lessons. She was immediately on board, and we set up a schedule to video chat a few times a week. I didn't think of it at first, but after overhearing the lessons, I decided I was going to work on my German, too. So we all hop on FaceTime with my sister-in-law to practice. After a few weeks of lessons, I purchased a subscription to a language-learning app, and with all of it combined, our household is well on its way to speaking German!

Related:
What Parents Need to Know About Potty-Training While Social Distancing

I'm so grateful for our health and safety, but I'm also grateful for the time we get to spend learning German. Aside from learning to speak a new language, we are getting to catch up with my husband's sister on a more regular basis. We are learning new words, phrases, and songs and getting to chat in between bilingual games. My father-in-law has been so thrilled the kids are learning his native language. He'll even participate in lessons by sending us videos of himself singing old German children's songs.

My 2-year-old son now says "guten appetit" (enjoy your meal) every night when we sit down for dinner. My daughter mindlessly sings children's songs like "Head, Shoulders, Knees, and Toes" in German while she's playing. She will ask for "wasser" (water) when we come in from playing outside. My son will point to his cars and trucks and name them by color with the correct German equivalent. They both immediately spout off "how are you today?" in German on our video chats to their German-speaking relatives. My favorite is when they run up to their dad when he comes home from work and just excitedly yell whatever words they learned that day. I love seeing his proud smile as they shout in German the words and phrases: "Butterfly! Chicken! Bird! I am a princess! I am hungry! I eat hamburgers!" Learning a new language is doing exactly what I had always hoped - it's bringing us all closer together. And during a time where we can't physically be together and we are all stressed, sad, and confused, this is proving to be an awesome way to experience what family means and make memories in a new way.