Nolan’s 14: A How To Guide By Brandon Stapanowich

In the past two weeks, both the men’s and women’s Fastest Known Time (FKT) records for the historic Nolan’s 14 route in Colorado’s Sawatch mountain range were broken. Fastest Known Times, or FKTs, are times records set on particular routes in the trail running world.

[PRO TIP] Now you know what an FKT is; bone up on your trail running vocabulary and GTK (get to know) all the commonly used acronyms.

The Nolan’s 14 is arguably one of the most difficult FKTs to undertake. It involves connecting fourteen 14,000 foot peaks, which depending on the route taken, includes over 100 miles and 45,000 feet of elevation gain across rocky high alpine terrain. For this article, I spoke with Nolan’s 14 finisher, Brandon Stapanowich, about his experience completing the challenge in 2014 in 54 hours and 48 minutes.

Here he shares his training and advice for those wishing to undertake the Nolan’s 14. Also, stay tuned for an article in the coming days about Sarah Hansel, the new women’s Nolan’s 14 record holder. 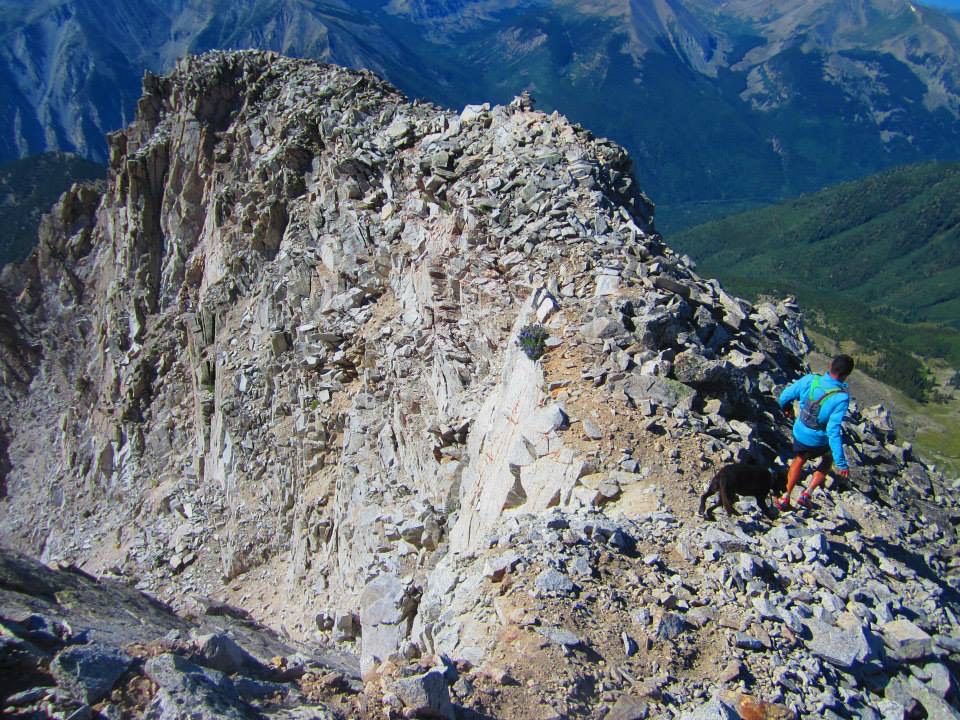 [TAYTE] What inspired you to do Nolan’s 14 and had you ever done anything like that before?
[BRANDON] I did it with a friend of mine, Gavin McKenzie and we embarked on a supported, southbound trip starting at the Fish Hatchery trailhead in Leadville, CO. At that point in my life, largely through some unexpected lottery luck, I had run a number of big one hundred mile races including Leadville Trail 100, Western States 100 Mile Endurance Run, and most recently Hawaii’s H.U.R.T. Trail 100 in January of that year.

Looking back, I think that was somewhat of a transitional period for me and the timing was right for an adventure such as this. When I began running longer distances, the lure of the 100 mile race was tremendously enticing and traveling 100 miles on foot seemed so incomprehensible. After a couple of successful finishes though, you begin to look for other adventures that offer the same level of fulfillment. With growing confidence and curiosity, I wondered what other challenges may be out there and Nolan’s 14 seemed like a worthy endeavor.

[TAYTE] How did you prepare for this challenge and would you prepare differently if were you to do it again?
[BRANDON] We planned to go Labor Day weekend. That’s usually a good time of year as it often offers drier terrain and less electricity in the skies. The route touts around 44,000 ft of climbing so my training was unsurprisingly elevation-heavy with the biggest day being a 24 hour bout of laps on the Manitou Incline in Manitou Springs, Colorado in July. Aside from that, I think the most valuable piece of training was the work done on the route.

Over the course of three or four weekends, I’d go out and scout sections of the trail. Not only was this the most specific and useful part of my training, but it was the most fun as you were able to see the entirety of the route in daylight with none of the sleep deprivation. As more people complete the challenge, better information is gleaned. There are lines that we took then that may not necessarily be the lines we’d take now and I think if I were to do it again, I’d spend a considerable amount of time exploring different variations. 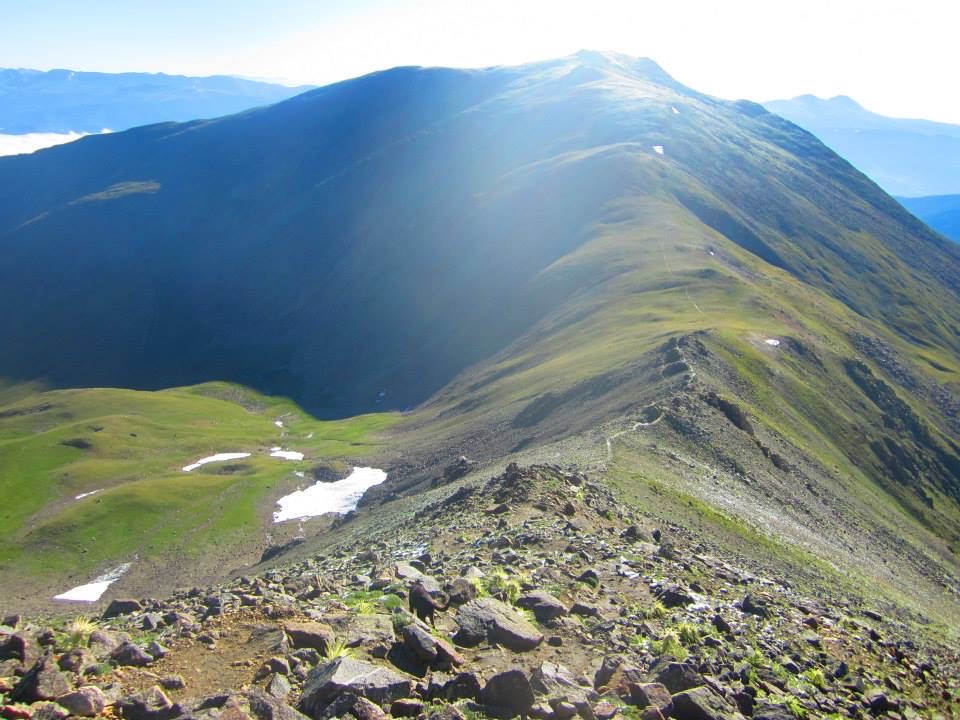 [TAYTE] Aside from the challenge of running that far with so much vertical gain, how did you deal with other physical challenges such as sleep deprivation or running out of fuel?
[BRANDON] With several resupply points along the way, I don’t recall struggling with calories or fluids. For me, managing the sleep deprivation was the hardest part of the journey. I had never done anything exceeding 24 hours so an event approaching 60 hours made for some novel challenges. We ended up sleeping for two 30-45 minute bouts over the course of the trek but the second night coming over Mount Princeton was especially difficult. I remember just feeling so delirious and disoriented. But staying grounded to the fact that all of these feelings, both bad and good, would pass and remaining focused on finishing under the goal time of 60 hours was helpful in willing my feet to continue stepping.

[TAYTE] What were your favorite parts of the Nolan’s 14 experience?
[BRANDON] Shortly after that energetic nadir off of Princeton came a spiritual rebound that remains perhaps the most salient of the entire trip. At that point, just the peaks Antero, Tabuache and Shavano remained and the sun was rising as we traversed the ridge to Antero.

The idea of Nolan’s 14 was previously impossible for me to fully conceptualize going into it, but at that point, I was able to finally grasp that we were going to finish. The exhaustive struggle of the adventure, in combination with a deep sense of gratitude for all of our friends that came out to support us made for an emotionally poignant experience. Tears were shed!

[TAYTE] How difficult was it to stay “on route” and were you ever lost or unsure of your direction?
[BRANDON] Gavin made a Nolan’s 14 attempt in 2013 but was thwarted by some logistical issues. Having that previous year’s experience, and living in Leadville, CO at the time allowed him to learn the Sawatch range extensively. I was able to scout about 80% of the route in training but having Gavin’s company and expertise was a huge part of our success. There was one point coming off of Princeton in the darkness, when we used a GPS app to confirm our location, but all other navigation was based on prior recon trips.

[TAYTE] What advice would you give to someone attempting Nolan’s 14?
[BRANDON] While the idea of doing a solo trip is enticing, at the same time, I think having the right adventure buddy can add to the enjoyment, and safety of the experience. Several years later, I completed a self supported trek across the Colorado Trail and while that was uniquely gratifying, for a lot of the time I was out there, I missed having the company of a good friend. While going with someone else creates its own challenges and it’s natural to have your highs and lows come at different intervals, I think Gavin and I worked well in pulling one another along when the other was struggling.

My other advice would be to document the journey for yourself. I took a GoPro along and made a pretty shaky video (see below) by today’s standards, but having something tangible, no matter what the form, is something that I’ve come to appreciate more as the years pass.

[TAYTE] Do you have any plans to do Nolan’s 14 again in the near future?
[BRANDON] The idea of going back is one that crosses my mind time and again. While I don’t typically like to repeat big events or races, I think going northbound would make for a distinct enough experience.

[TAYTE] What are your other running goals for the next year?
[BRANDON] Nolan’s 14 taught me the joys of creatively linking peaks, of bringing to life something that has only been envisioned on topographical maps, and embracing big challenges that engender just a little bit of fear. I have some ideas for local adventures but for now, with the heightened level of turmoil in the world, it seems that this is a season of life in which running goals have been pushed to a level of secondary importance. And that’s ok.

For me, this moment’s challenge is learning to carry, in a meaningful way, that curious, grateful, patient, and persistent energy, which has been cultivated through running, into our communities and use it to acknowledge and address the inequalities and injustices that exist.

The post Nolan’s 14: A How To Guide By Brandon Stapanowich appeared first on ATRA.