The Mathematics of Having More Children 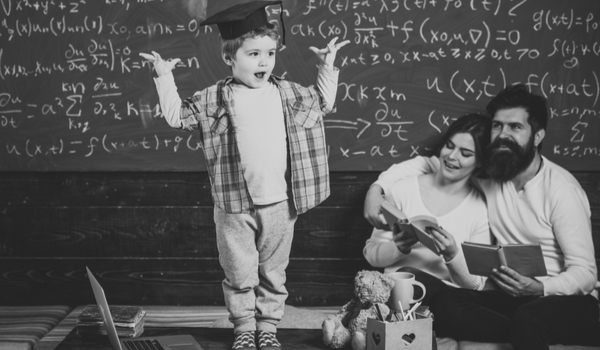 The Fielding family were sitting around the kitchen table having a light breakfast of chaos and eggs, the timeless aroma of roasted coffee hijacking my senses and taking me on a journey down my own memory lane. It was 6.37 a.m. My reverie was broken by the younger of my two children, Luca, drawing on my hand in green felt tip. He had his other hand in my coffee and had thrown most of his breakfast at his sister, who, in turn had thrown it back at him, missed and hit me slap bang in the middle of my cheek.

Luca was 18 months old and trying to speak. He knew a few words. Nothing flamboyant: dog, car, cat and Daddy was about as far as he had got (much to his mother’s chagrin). By no means a genius, but not bad. He made a squawking sound, a little like a gopher; but there was a lexicon to his vocal discharge. No, he wasn’t of the rodent family; he was stepping up to the kingdom of human communication.

We had given up reading and researching toddler development when our first child reached the mighty age of four. However, a few things lingered at the surface of our combined parent brain. Lucky second child. I remember reading something along the lines of:

“Toddlers respond best to encouragement and interest, rather than correction or being made fun of.”

It was best not to correct his gargling witchcraft but instead coax it out. I looked at him sideways.

“What are you trying to say?” I said, nonchalantly taking the knife he had conjured out of thin air from his sticky fingers.

He squawked again, flexing his lips and pushing out something not dissimilar to a raspberry. I wiped the spit from my eye. Luca smiled. And then started eating a pen.

“Luca,” I said, “they don’t eat pens in blue zones. If you want to live to a hundred you need to change your diet. More olive oil, more fish, less ink.”

He wasn’t listening. He was eyeing his sister, the felt tip hanging out the corner of his mouth like an unused cigarette.

His sister, Alice, was preparing her counter-attack to a skirmish I had long since forgotten. Her brother was getting too much attention and she wasn’t going to stand for that. We’d read from The Art of War the night before and Alice knew she had to be wise in her attack; focus on what was undefended. She launched a devastating cereal and milk bombardment.

It was messy. But I have to say, an efficient use of strategy. Sun Tzu would have been so proud.

I came to this conclusion because children regress, not a regression to the norm, rather a regression to the age of the youngest sibling present at any one time. A 4-year old will behave like his 2-year-old sister if the 2-year old is getting all the attention. A 5-year old will behave like her 3-year-old sister, again, if the 3-year old is getting all of the attention. And the smallest always get the attention because they might accidentally kill themselves if they don’t. The universe is programmed this way so you, as a parent, don’t notice time ticking by and grandparents can say, “oh, hasn’t she grown.”

Luca added the fifth word to his bludgeoning vocabulary, “Peppa.”

And I fell down a wormhole. Déjà vu washed over me in high-frequency waves and I was being smashed on the coral seabed. In the sepia tone of my mind’s eye, I remembered when Alice began her Peppa Pig obsession. It followed quickly on the heels of her princess phase and was still going strong when she hit her high-intensity coloring in stage.

It was a dark and expensive time. Something I had recklessly put behind me, jettisoned into the memory banks, not to be seen again until the children flew the nest and my wife and I sat in our quiet home wishing for the return of Peppa Pig and reminiscing about the day we had spent €300 on a family trip to Peppa Pig world, or the Christmas our ears were bludgeoned to death by the beep and laughter of George’s dinosaur. How I wished they’d do the bacon episode as we sat through yet another box set.

But she was back. Like Freddy Kruger, out to stalk our dreams.

And the chorus grew as Alice regressed. It was an animalistic regression carried out by a four-year-old who wasn’t conscious of her behavior.

We were about to go through the same journey. We’d have to go back to Peppa Pig world.

If you are thinking of having more children, remember what I said earlier: when you have two children you live through everything three times. The oldest child goes through it, then the second child follows in those tiny footsteps, and then the eldest child regresses and goes through the same thing again, only much more aggressively and with little to none of the cuteness.

This is why two children are enough for this dad. All combinations impart equal love. For us, it is a daughter and a son. Thankfully our daughter is the eldest and can pass on some of her wisdom to her stone throwing brother. No, the Fielding family is four, that is the magic number and we aren’t rolling the dice again. The casino is closing; we are cashing in our chips and heading out into the tranquil waters of the age of reason with a smile on our face – a little unhinged and slightly anxious smile – but a smile nonetheless.

There is a long road ahead. Luca has only recently started walking and he certainly isn’t potty trained. Alice will regress and we will go through it (again) together, as a family. School will start and Luca will cry for pencil sharpeners, the color of his ruler sending him into spasms of grief. Alice will forget she is nearly six and scream blue murder for the Paw Patrol eraser she deleted from her memory. The neighbors will call the police. Alice will pretend she is three, she’ll pretend she’s a tree; she’ll pretend there is wisdom in toddler TV.

With two children you go through everything three times.

And yes, of course, it is beautiful. The ephemeral, gloriousness of life is reflected in our children’s eyes; the endlessness of the universe fleetingly represented in our children’s equally endless positivity and unwavering love of play. Our children are a mirror of us, unblemished by the burdens and stains of adult life. Living through their milestones that extra time is a wondrous extra gift, perhaps one I shouldn’t be so quick to ridicule.

This is good news, because last night, as the kids slept soundly in their beds, my wife and I, unperturbed by sibling rivalry, actually had a conversation.

It was a short conversation.

“Really?” I said, huge waves of confusion rolling over me as I slid off the sofa. “I’ve always wanted a seventh child.”

She said, “Do you mean third?”

I love my wife.

And our…  three children?

The post The Mathematics of Having More Children appeared first on The Good Men Project.